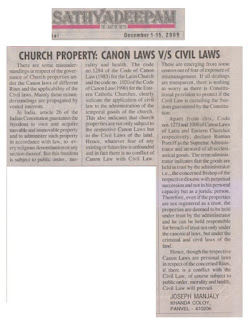 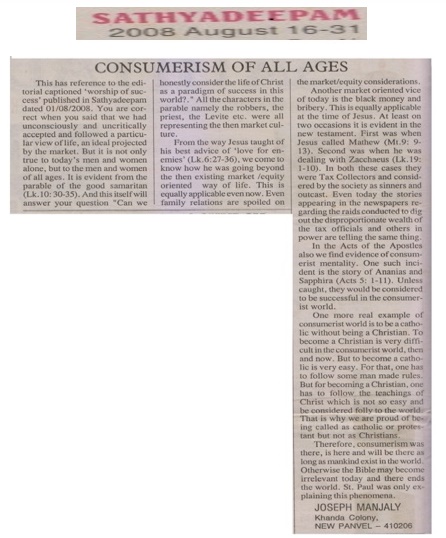 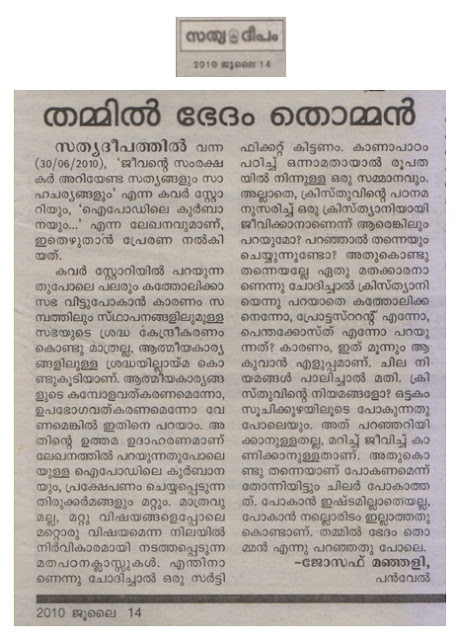 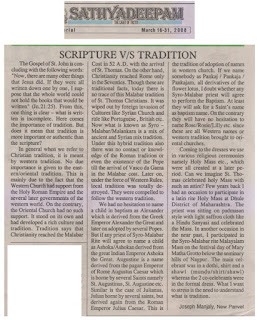 The attachment is my comment on an article published in the ‘SATHYADEEPAM’ Malayalam weekly dated 25-11-2009, based on a statement of the then Pope with regard to the relationship of the Artists and the Church. It is given here mainly to show how people are interpreting wrongly without understanding the purpose and circumstances particularly with reference to Judas Iscariot in continuation to my earlier post. The published matter is roughly translated as follows: “  The statement of the Holy Father was not with reference to the Church Construction. On the contrary it was made when he was addressing the Artists. Hence it cannot be taken as justifying the extravaganza on the church construction of the medieval period also known as dark ages. Those churches are standing today as museums rather than churches.

Similarly another extravaganza event in the Bible, ‘He said this, not because he cared about the poor, but because he was a thief. He carried the money bag and would help himself from it’ was not told by Jesus. But it is only a remark of the Gospel writer John. What Jesus told was, ‘Leave her alone! Let her keep what she has for the day of my burial’ and not made any comment against Judas Iscariot. On the contrary there is no such mention about Judas Iscariot in the Gospels of Mathew and Mark who also described the same incident. (Jn 12:6)

Similarly, there are also other circumstances quoted at wrong places. They are, to justify drunkenness quote the miracle of turning water into wine, to justify high interest rate quote the Parable of the Talents etc. The use of certain biblical quotes by the Satan during the temptation of Jesus is also a good example for using words at wrong place and/or purpose.”

Go to my home page: www.manjaly.net

"Stop judging, that you may not be judged (Mt.7:1). Still we judge and condemn Judas Iscariot for his betrayal and suicide.

But why we do not think in a different way which could be the nearest possible in such a situation. First of all he might have been approached by the high priest and their men to help them in catching Jesus in an isolated place, for which money was offered, because they feared the crowd. Having full faith in Jesus’ ability to escape through miracle, he accepted the offer to take the money as well as to fool the High priest and his men. And his plan was coming true, when all of them fell to the ground when Jesus told “I am he”(Jn.18:6). This chance was enough for Jesus to escape and that was what Judas had in his mind. But making his calculations wrong, Jesus did not escape as he expected. Since he loved and trusted Jesus too much, he could not bear this situation and ran back to the high priest and his men and begged for his release in return of the money. Here also he failed. Because of the shock of such an unbearable situation, he went mad and ran away and committed suicide. Here we cannot see any of his love for money as is believed, but we can see the love and blind faith in Jesus. Perhaps that may be the reason why Jesus told, “For the Son of Man indeed goes, as it is written of him, but woe to that man by whom the Son of Man is betrayed. It would be better for that man if he had never been born" meaning everything goes according to the will of god as is written, but this poor fellow would be cursed by all.

There is also another bad confusing remark against Judas regarding an extravaganza event in the Gospel, ‘He said this, not because he cared about the poor, but because he was a thief. He carried the money bag and would help himself from it’. Actually, that remark was not told by Jesus. But it is only a remark of the Gospel writer John. What Jesus told was, ‘Leave her alone! Let her keep what she has for the day of my burial’ and not made any comment against Judas Iscariot. On the contrary there is no such mention about Judas Iscariot in the Gospels of Mathew and Mark who also described the same incident. (Jn 12:6)

Therefore, considering the whole incidents together with the contradictions and confusions in the testimony of different gospel writers, there is enough room to give the benefit of doubt to the alleged betrayer, for we do not know whether Jesus included him also in the list of disciples who will sit on thrones judging the twelve tribes of Israel (Lk.22:30).

To know more about my writings, go to my home page:  www.manjaly.net 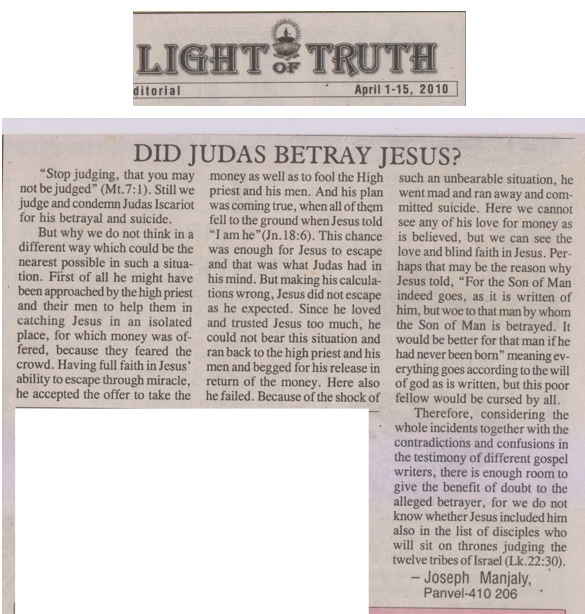 “a) Issue a  writ  in  the  nature  of Mandamus/Certiorary  and  thereby  grant declaration  that  the  Code  of Common Law is  the  Personal  Law  of  the  Indian Christians  and  has  to  be  recognized  as such  by  the Courts  (Civil  and  Criminal) in India  and  which  would  supersede  any other  law  in  conflict  thereto  and other accordingly.  …………..  In  view  of  the decision  rendered  by  this  Court,  as  has been  extracted hereinabove,  we  are  of the  view,  that  the  instant  writ  petition is wholly  devoid  of  merit  and  is  liable  to be  dismissed.”  It  was  also  mentioned  in the  record  of  proceedings  that  the advocate  of  the  Petitioner was  absent during  the  hearing.  There  is  nothing else in  the  judgement  as  blown  out  by  the press.

However,  in  my  opinion,  the original  Kerala  High  Court  case  as  well as  in  the  instant  case,  the  issue was  not properly  handled  by  the  parties  in  the right  direction  by  challenging  the constitutional  validity of  the  existing  laws made  during  the  British  Raj  matching  to the  laws  of  the  Church  of  England (counter  part  of  the  CNI/CSI),  as distinguished  from  the  Canon  laws  and personal  local  laws applicable  to  the Indian  Catholics  and  particularly  Malabar Christians  who  were  in  existence  in India since  A.D.52,  even  before  the  Canon  Law was  brought  to  India  by  the  Portuguese after  A.D.  1500.

(Visit my HOME PAGE www.manjaly.net for more details of my other activities.) 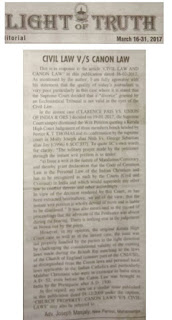 In the Sathyadeepam English edition THE LIGHT OF TRUTH (March 16-31,2008), I had written under the heading,"CHARISMATIC PENTECOSTALISM" distinguishing what is Catholicism, Protestantism, Pentecostalism and Christianity. What Jesus told and what we are doing? This is what Pope Francis told recently according to The Huffington Post reported under the heading “Pope Francis Slams Hypocrite Christians, Suggests Atheists Are Better”. It continued quoting Pope Francis, after he gave an example of a Christian boss taking a vacation as his workers went unpaid -- and issued a stern warning about where that will lead.
“You will arrive in heaven and you will knock at the gate: ‘Here I am, Lord!’ ― ‘But don’t you remember? I went to Church, I was close to you, I belong to this association, I did this… Don’t you remember all the offerings I made?’ ‘Yes, I remember. The offerings, I remember them: All dirty. All stolen from the poor. I don’t know you.’ That will be Jesus’ response to these scandalous people who live a double life.”
And see the copy of my writing below:- 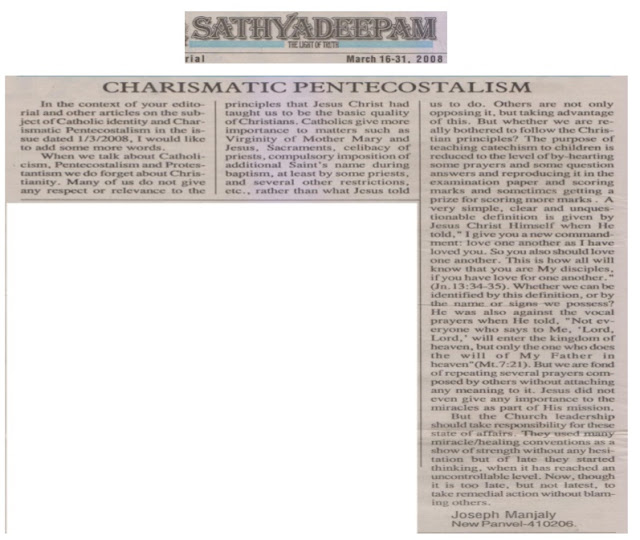 CELIBACY OF CATHOLIC PRIESTS AND SOME MISCONCEPTIONS - MY VIEWS 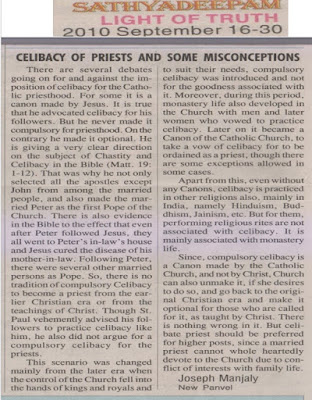 A book on my fight against corruption and scams: 'A FRAUD IN THE INDIAN CONSTITUTION'